The Moore Bills takes a short trip to the Washington Canyon for some nonstop yellowfin action. Leaving the docks in Ocean City Maryland at 1:45pm and returning that evening with a box filled to the top. This video uses a public domain tuna documentary creatively mixed throughout its action.

You guessed it... Go Pro on the gaff!

Pilot whales are among the largest of the oceanic dolphins, exceeded in size only by the killer whale. They and other large members of the dolphin family are also known as blackfish.
Pilot whales are primarily squid eaters, but will feed on fish, as well. They are also highly social, and studies suggest that both males and females remain in their mothers' pods, an unusual trait among mammals, also found in certain killer whale communities. Short-finned pilot whales are also one of the few mammal species where females go through menopause, and postreproductive females may contribute to the survival of younger members of their pods. Pilot whales are notorious for stranding themselves on beaches, and are among the most common cetacean stranders. Several theories have been proposed to account for this behavior. The status of both species is not understood, and they have been subject to direct and indirect catches by fisheries. Whalers in a few countries continue to hunt pilot whales.

Another steller day on the Moore Bills. Traveled around some epic lightning storms early morning to land in the Washington Canyon for the early bite. With a lone spreader bar and big boy green stick in action we landed a healthy white marlin within the first 10 minuets of trolling. The action came almost too soon to excite the young crew nursing last nights misadventures on land. The day continued with non stop action! Estimated over 60 Yellowfin with a couple skippies in the mix. The crew was in constant motion all day. Anglers were in full participation with direction from Captain Rob and 1st mate Steve. First time gaffers and first time offshore ladies played part in an exciting day laying tracks throughout the canyon many miles from the land of funnel cake and parking meters. Once outside ( About 60 Miles), life was abundant, pilot wales were feeding and swimming around the boat every second of the day (no exaggeration !!!) . For the first timers and the experienced anglers it was a show not to be matched by any documentary! The green stick provided a days worth of entertainment and worked the overworked throughout the day. Resetting lines and drilling in on the fish, Captain Rob and Steve proved there weight in fish and experience. Anglers watched the action as tuna boiled and hit the rigs over and over. Lines peeled off, anglers danced a clumbsy waltz ducking and switching places like a game of deep sea leap frog. 1st mate Captain Steve was the ref and worked the crew like a well oiled machine as head honcho Captain Rob rolled forward with a mission. Anglers rotated through each cover up and chilled in the AC when it was time to tag off . A highlight of the day provided a blue Marlin arial show as it attacked one of our unlucky yellowfin. Estimated around 400 lb the big blue charged the already hooked tuna and than took flight! All in all another high energy day on the Moore Bills. Visit moorebilles.com to see the full video, another day in the near future...

On the dock - Overnighter produces big take with Captain Rob and the Moore Bills Under Armour Team.

Video Footage of anglers and competitors during the first day of the White Marlin Open.

The final day of the White Marlin Open in Ocean City Maryland. The fish gods were brutal today while fighting an eyeball on a tld. A day at sea searching for a $1,500,000 white marlin. I guess if every trip went as good as the last it would be called "catching", not "Fishing". Always an energetic crew while fishing the Moore Bills. This vid tells the story of a beautiful day offshore battling other huge sport fishers for the $ fish! Enjoy the antics of our crew and the events of this final tournament day. 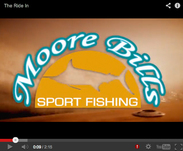 Ocean City, Maryland charter boat "Moore Bills" is a 2006, 60 foot B&B Boat Works Custom Carolina Sportfisher, powered with C15 Cats. She is FAST, 35 kts cruise, as well as DRY. Fitted with state of the art electronics and a yacht finish with all of the amenities needed for an unforgettable day on the water. Experience a ride home from the Baltimore Canyon traveling along with fellow Ocean City charters. The seas were questionable in the morning and a slim number of boats charged offshore. Captain Rob Skillman maintains constant contact over the radio with fellow captains to help narrow down the hot spots. Having some fun on the way home, this "WOLFPACK" demonstrates what these big boys can do on the water. A playful and impressive demonstration of sheer power blasting through the seas at full throttle!! 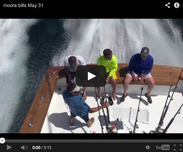 Moore Bills Friday May 31, 2013: Moore Bills took this years maiden voyage well past the canyons to do some recon for the season. Tons of life including Pilot whales and porpoise. Offshore weather was perfect compared to the last week of violent winds. 2 yellowfin tuna made there way to our lines and one keeper made a tasty but expensive diner!  Looks like the warm water is working it way towards Ocean City but for now its time to switch gears back to Sharking!

7 in the box, and great times had by all. Several 1st time offshore angles get worked in a tuna frenzy. Beautiful day in the Baltimore and Washington canyons. Always a treat when the porpoise swim around the boat and play under the bow. Ever wanted to see what false albacore taste like? Well you may be surprised to see our sushi sampler segment !!!

Friends of the Moore Bills travel to Key West for some Permit and Mahi action.

( Under Amour Version of  Canyon Lands) See the Moore Bill in Action landing yellowfin tuna and chasing porpoise in the Baltimore and Washington Canyon. Great charter, outstanding anglers having a blast hooking several tuna and being  enjoying a day on the Moore Bills.

The Moore The Merrier: November 2012

Wishing everyone an incredible holiday season and a happy new year. Enjoy this fun trip 1 mile off the coast of Ocean City Maryland with the Moore Bills family and friends. The Striper are finally here. Book your trip any time and stock the fridge with the striped bass you have been waiting for all season!!!

( Under Amour Version of Covered Up) Epic day in the canyons on the Moore Bills. 28 yellowfin, 24 to the dock, Full yellowfin cover ups with bonita in the mix! 10 min video with tons of Ocean City Offshore action.

Epic day in the canyons on the Moore Bills. 28 yellowfin, 24 to the dock, Full yellowfin cover ups with bonita in the mix! 10 min video with tons of Ocean City Offshore action.

Moore Bills Sport Fishing crew from Ocean City Maryland joins the "Billfish" in Mexico for some Wahoo and Billfish action.Footage filmed by the crew of Moore Bills - edited by Bitfisher Design

Moore Bills Sport Fishing crew from Ocean City Maryland joins the "Billfish" in Mexico for some Billfish action.Footage filmed by the crew of Moore Bills - edited by Bitfisher Design

Moore Bills Sport Fishing crew from Ocean City Maryland joins the "Billfish" in Mexico for some Billfish action.Footage filmed by the crew of Moore Bills - edited by Bitfisher Design

May 27,2011 Moore Bills was the first boat to land a Mahi. Fishing at the 1000 fathom line in Wilmington Canyon. So far this season Moore Bills has the Ocean City, MD 1st catch records for both Mahi and Bluefin.

May 27,2011 Moore Bills was the first boat to land a Mahi. Fishing at the 1000 fathom line in Wilmington Canyon. So far this season Moore Bills has the Ocean City, MD 1st catch records for both Mahi and Bluefin.

You can always expect an incredible Sunrise on your trip out of Ocean City, Maryland on the Moore Bills. Than again you always have the option to snooze the ride out in style in one of the bunk beds, full couches, or large birth beds. Your call but i vote for the sunrise every time!

Take a ride on the Moore Bills

Ride along with Ocean City's top sportfisher morning till dusk as they pick off yellowfin tuna while trolling next to huge pods of pilot whales, porpoise, and a huge humpbacks! Nice day on the water with Moore Bills. Although the monster yellowfin bite was not crazy intense this trip, we managed to land over 14 with several triple hookups!! Had a blast on this beautiful boat, Rob Captain Rob Skillman has over 14 years of professional sport fishing experience and offered not only some great fishing but put us on a large group of humpback and poilet whales!!! The captain and crew members have won and placed in twelve of the larger east coast tournaments. The crew is very knowledgeable and extremely dedicated to the sport. It is their goal to see that each and every angler on the trip has an unforgettable experience aboard the Moore Bills. Moore Bills is a 2006, 60 foot B&B Boat Works Custom Carolina Sportfisher, powered with C15 Cats. She is FAST, 35 kts cruise, as well as DRY. Fitted with state of the art electronics and a yacht finish with all of the amenities needed for an unforgettable day on the water.